An evening with Mireille

Mireille Guiliano visited my town last night promoting her newest book French Women Don’t Get Facelifts. I was so excited when my Mum emailed a while back to let me know she was coming and immediately booked my ticket!

It was a beautiful summer evening and the event ‘Conversation with Mireille’ was held at the Villa Maria vineyard which looked absolutely stunning as I drove in.

Of course I put a lot of thought into what I was going to wear. The Diane Von Furstenberg wrap dress looked to be a shoo-in but it was a very hot and humid day so I wondered if I would be too warm in its long-ish fitting sleeves. I decided on one of my other Hawaii purchases, an army green Banana Republic coatdress. 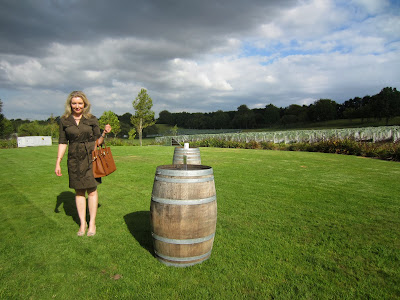 There were a lot of women already there when I arrived and many of them were milling outside. I saw inside the door that some women were already seated so I went in and bravely sat in the very first row, right in front of the lectern. I didn’t want to miss a single breath.

She was fabulous. Very gentle and fun and she seemed a genuinely lovely person. She read a few excerpts from her book and talked about the different categories in her newest book, such as dressing, skincare, grooming, ‘invisible’ exercise and enjoying life.

I took good notice of her personal style too of course. Mireille wore a blouse in white and black with a toile de jouy type print and it seemed to be one of those uniquely French ones that are finely pleated/scrunched, the ruffled collar and placket edging certainly was. Her pants were classic and not tight at all, and she had mid-heel shoe-boots in embossed black suede. 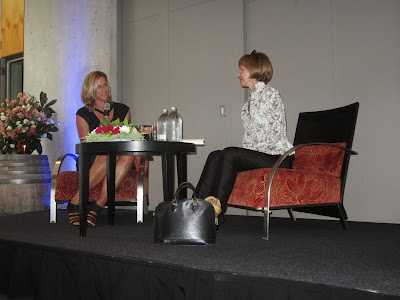 You couldn’t help but notice Mireille's black epi-leather Louis Vuitton bag, centre-stage as it was. I’m not sure what the style is known as but I found some pictures of one called Bowling Montaigne which it may be.

And hanging slightly out of her bag was a scarf in a beautiful ochre colour. It was a pleated silky/acetate looking fabric and the shade was a good match for her hair (she must already know the trick that three personalised colours that are great for you are to match your hair, eye and skin colour). 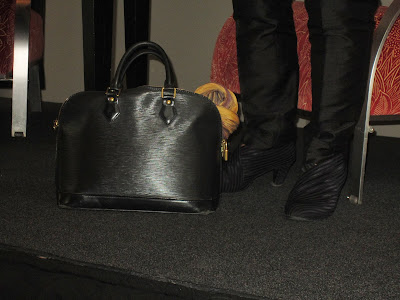 Her makeup was subtle to the point of unnoticeable. Mireille talked about this during the evening. She said as she gets older she wears less, and said bright red lipstick is too much for her now, and that too much eye makeup emphasizes her wrinkles, so she wears very little. Of course there are women of a certain age who wear quite striking makeup and that is part of their ‘look’. It all goes back to knowing yourself and being uniquely you. Apparently French women would be horrified to look like other women and want their own look that no-one else has.

I noticed Mireille’s hands – she had short, neat nails, with either no polish or just clear. I always feel bad that I don’t wear at least a pale pink polish, but the reality with my job is that it chips within one day, and even if you can’t notice with a light colour, I know it’s chipped and tacky. Opening shoebox after shoebox just shears that colour right off.

Mireille said there were usually two kinds of people who came to her book launches. 1. Women who want to lose weight (particularly for her first book I suppose) and 2. Francophiles. I tried to appear invisible at that comment because it is quite an embarrassing thing to be exposed as someone who is shallow enough to like something or someone just because they are French and stylish!

She was surprised when her first book became a bestseller in France, because as she rightly said, why would a French woman listen to another French women living in America talking about being French. But the main reason French women liked her book was the nostalgia factor. They told her they remembered their mothers saying the same things to them that Mireille recounted.

About exercise Mireille said she and her French friends hated that word and did not use the gym. Of course some French women go to the gym but it is not as common as in other countries. One of her close American friends moved to Paris and ran gym classes there. When they caught up two years later, Mireille was stunned to find that her American friend did not speak one word of French. The reason was that all her clients were ex-pats and not French women! Mireille talked about walking being the best exercise, and said others also swam, cycled and did yoga.

I even got to speak directly to Mireille. At the end of her talk, audience members were asked if they had any questions. Not many people asked, and I had a sudden thought what an amazing opportunity this was but I couldn’t think of anything to ask! I said to myself ‘what is the best question to ask Mireille’. I then put my hand up and the presenter sitting with her handed me her microphone. I said to Mireille that she obviously travelled a lot (she was in London the previous week, she had mentioned earlier) and how did she pack, did she have the perfect capsule wardrobe and what were her travel secrets.

She told us that she never checked her bag but always had the small wheelie one that you could carry on. She said sometimes airports are so spread out you are walking for miles, and who wants to drag a big heavy bag around. She also said she had three items of clothing that she made four outfits from. I’m going to try and work that one out! She also said she always put tissue paper in between her clothing items.

That’s another ‘life of luxury’ tip I thought afterwards. Tissue paper is not expensive (and often free – I save it up and never use it for anything) and you could reuse it over and over if you are careful. I am going to put some in my suitcase so I remember next time I travel. 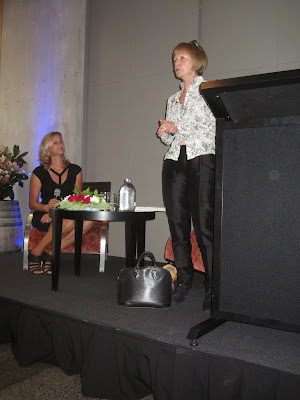 After her talk we were told we could purchase her new book and have it signed if we wished. I was thrilled to have this chance and had put off buying the book hoping this would be the case. I have been reading it though as I already had it out of the library (so now I can return it!) and I love it.

I bought the book and joined the lengthy queue. When it came to my turn she was sweet and quite unassuming, very normal really! She wrote my name and signed hers. As I was about to leave and she was moving onto the next person I squeaked out at the last minute ‘did she allow photos’. ‘Of course’, she replied. And she so thoughtfully moved a gift she was given off the seat next to her and pulled it up close for a better photo. She really is lovely and charming, and I’d be very surprised if it was an act. People can’t fake that. As I was leaving I said to her ‘I’ll see you with your next book’ to which she replied ‘it will be about oysters… and carrots’. 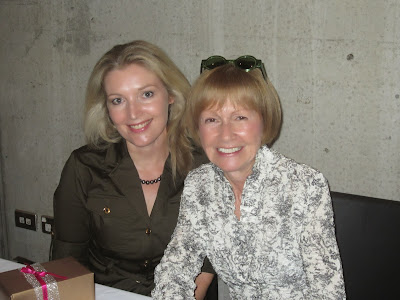 I didn’t take notes like I thought I might because I really wanted to be present and enjoy the talk, but I did jot down some when I got home of the things I remembered.

At one point she told the audience that if they don’t change anything else in your life at all, add good yoghurt into your diet 'for one year', plain yoghurt that is made just from milk and culture. She reckons that one yoghurt a day will help you lose weight because ‘without going into all of the science about it’ yoghurt has fat-burning properties.

I’m not so much interested in weight loss these days but more focused on maximum nutrition, because I know if you focus on eating good, real nutritious food, your body and weight will be stable and happy. I had forgotten about yoghurt for a while though, so I bought some today to add to my fresh fruit and raw nuts for breakfast. 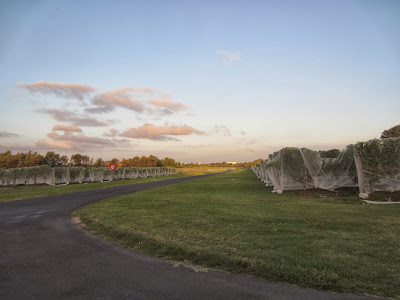 Mireille said of relationships that ‘love’ and ‘laughter’ are the two things to have. She said you can have one or the other and be quite happy, but to have both means you’ve really struck the jackpot.

To summarise, the message I took from Mireille in both her words and the way she comported herself, was to be relaxed and content, enjoy the fun side of life, and be gentle with and look after yourself in all ways.

As I drove home just after 8pm with the sun setting on a beautiful dark blue sky, I felt so grateful and fortunate to have been able to listen to and meet one of my favourite and most inspirational authors. 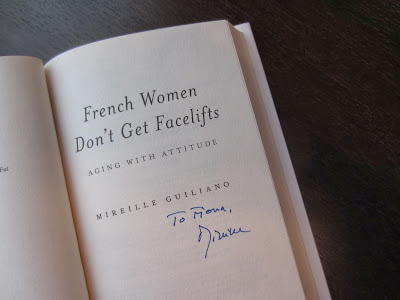 Merci for your comment. Wishing you a chic day!